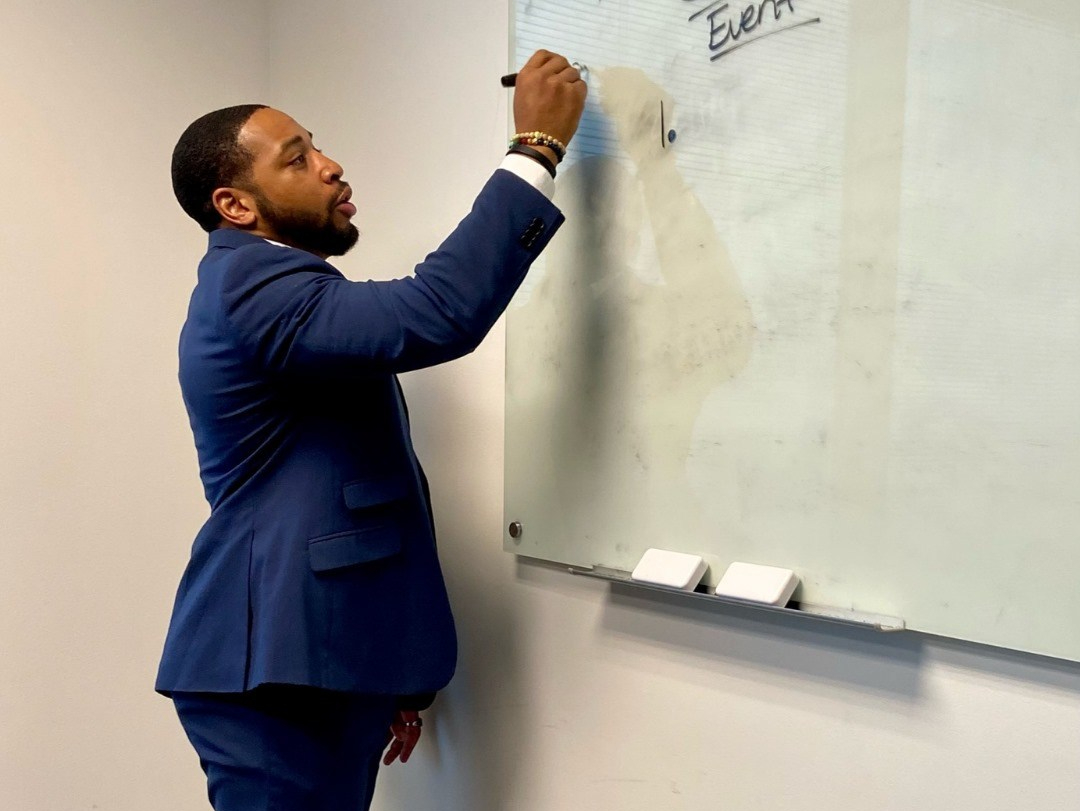 DMC Atlanta’s newest Manager, Leon Butts, is a twenty-seven-year-old spitfire with the experience and wisdom of a much older man. What factors came together to result in the ultimate leader? Could it be coming from a family of twenty children? Could it be an intense collegiate athletic career on the road to Olympic competition? Could it be fatherhood and generosity? All of these things are parts of the overall package that is Leon Butts, and we sat down with him this month to discuss where he came from, and more importantly, where he’s going.

“I come from a very diverse background,” says Leon Butts, “my mom was a single mother, and I have nineteen brothers and sisters. Growing up was interesting, to say the least. Every day brought new adventures and almost felt like a Game of Thrones episode, to be honest, but it was always fun.”

“I grew up loving music and the arts, but was also raised in a very rough area demographically,” says Butts, “Being artistic wasn’t necessarily something that was celebrated; it was kind of looked down upon. It kind of felt like, ‘you’re a guy, you’re supposed to be tough,’ but I really loved poetry and music. No one in my family knew I could do those things until the day I was offered a full-ride scholarship for it. My mother knew I sang a bit around the house, but I don’t think anyone realized how real it was and that I was in my room writing poetry or mastering instruments. I kept it hush-hush, not only because of the demographic I was immersed in, but also when you come from a family of twenty kids, you learn to operate pretty independently.”

“Despite art being my thing, I also played a lot of sports,” says Butts, “I played literally every sport except basketball, and I was good at them. As a kid, I did struggle a bit with some anger issues, and sports and music gave me that outlet to express myself.”

After years of mastering the art of wrestling, Leon Butts accepted a scholarship to Middle Tennessee State University, where he got the opportunity to wrestle for the Junior Olympic teams and the Georgia Congressional teams. “I represented the United States on a pretty big scale,” says Butts, “it was an incredible experience, but ultimately, I didn’t go all the way through the Olympic system. I got to a point where I was satisfied with my athletic career.”

The entrepreneur and athlete is not exaggerating; Leon Butts was offered an opportunity to take Mixed Martial Arts professionally by fighting in the UFC. Why did he turn it down? “I knew I wanted something different for my life,” says Butts, “Part of me didn’t want to succeed with sports or music because I didn’t want any kids who came from a similar background and demographic to see me and think, ‘oh, that’s the only way for me to achieve or be successful.’”

After some time, Leon Butts returned to his roots in business. The leader grew up watching his grandparents succeed as generous business owners and wanted to support his community in the same way. “I watched my grandfather take care of the community since I was young.” says Butts, “He owned businesses and became the largest minority land-owner in upstate New York, before becoming the largest land-owner in the region, period. He had a generous spirit and would build houses and then let people from the community just live in them. It was my grandmother who went door-to-door collecting rent checks. I like to say she was the hammer to my Grandfather’s soft nail.” After graduating from school, Leon knew that he would never feel truly satisfied working for another individual, but instead, he was determined to make it on his own.

In his early twenties, Leon Butts experienced a turning point moment when he learned he would become a father to a beautiful baby girl. “I was afraid of fatherhood,” says Butts, “I was afraid that I wasn’t financially stable enough, but there was only one option. I put my nose to the grindstone and started investing in a sales career. I moved around different sales organizations for a couple of years until I found the right fit, which for me included business ethics.” That is one of the things that makes Leon Butts such a stellar business owner and leader — his sense of moral responsibility. “I’ve worked jobs before that didn’t value the idea of business ethics, so those were ultimately the wrong fit,” says Butts, “As a leader myself, one of the most important things is giving back. I don’t want to build someone else’s dream; I want to build my own and then share those benefits with the community.”

Before finding his fit at DMC Atlanta and planting the seeds to rise to upper management, Leon Butts experienced this industry’s ups and downs. “Those periods of instability were rough for me,” says Butts, “but ultimately, that time grew me and developed me into the person that I am. Those struggles made me, me. Without the hard times, I wouldn’t be in management currently. It gave me the mental fortitude and mental strength to persevere through rough times that I naturally encounter as a result of my chronic depression since childhood, which I only started opening up about in the past couple of years. The business is what helped me get through that, I went through a developmental growth spurt, and that sparked everything.”

His advice for absolutely anyone reading? Walk by faith, not by sight. “It’s not about religion,” says Butts, “walking by faith means believing in the fact that you personally have what it takes to persevere. At the end of the day, do you believe in yourself?”

In the next few years, Leon Butts hopes to continuously grow as a manager and leader, not just for his team, but for his entire network. “I have always wanted to be part of a top organization, not just the leader of a top office,” says Butts, “It isn’t about my office or me being the best. What matters is the overall network and community. I want to change people’s demographics and make life better for everyone around me. I want to retire my family and ensure that they don’t have to worry about bills. I want to afford an opportunity to anyone out there willing to put in the work.”

Some additional goals Leon Butts is prioritizing, almost as much as work, is philanthropy. “I value giving back to the community, so I want to help people less fortunate than me,” says Butts, “I do coaching for children, go to different schools, and join various zoom calls with sports teams and students to help motivate and inspire. School doesn’t teach you how to get through life. I want to change the way that we value education. I want to change the American education system and give kids something to look forward to. We need to speak with kids about their passions and what they want out of the world; we need to encourage kids’ dreams and use that as a cornerstone of their education.”

Whether he’s in the office spearheading a new sales program or inspiring today’s youth, it goes without saying that Leon Butts is the type of person you want in your corner; someone who sees the best in people and works to deliver his best to others. It’s been an honor working with Leon over the last couple of years, and to see him step into this new management role at DMC Atlanta is a victory for us all…a guarantee of a brighter tomorrow for our company and our people.